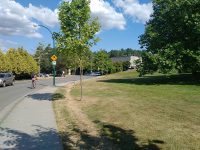 I was cycling in Vancouver on a busy hot summer day with a young lad who was new to his larger bicycle. We wanted a ride that would be challenging at this level but not overwhelming. Another consideration was to stay away from vehicle traffic as much as possible.

So we thought of going around the world, Science World, that is.

We started in the Kitsilano area right near Museum of Vancouver and Vancouver Academy of Music. The objective was to take the road down to where the Coast Guard Station is and then turn right to sneak underneath the Burrard Bridge. We cycled past a parking lot for boats and felt like we were sneaking under the Burrard Bridge. The path takes you to the right and around a condo building and onto a quiet street. Before you know it you’ve curved around and are on another mixed pedestrian/cyclist path heading toward Granville Island. Once you’ve reached Granville Island, you’ll know it because the Granville Bridge is huge and obvious and the traffic getting onto the island is a bit nuts on a sunny day. There’s a pedestrian and cyclist marked crossing, but make sure the cars see you first! Once across, there’s a well gardened route to follow. As you head east, the path winds and is marked between walkers and cyclists, but keep a sharp eye out for the inattentive. Many of them have headsets on and are carrying electronic devices. They go at strange angles. The route changes to a bumpy rocky slate surface but the scenery stays amazing.

Further east, you come of Stamp’s Landing, which is a small area with a couple of restaurants and a brief intersection with a cul-de-sac. Keep on going to move toward the next big spot, which is Olympic Village, where the 2010 Winter Olympics’ Athlete’s Village was. This site is now condos. The objective was to head to Science World and further along, but a certain pair of shorter legs became fatigued from pedalling a new heavier bike. We stopped short and decided that in order to make it back for dinner in a timely fashion, a return trip was required.

Maybe next time we can finish our “Around the [Science] World” Trip!