Gingerbread Displays at The Inn at Laurel Point 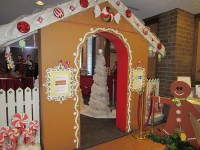 During the summer, there are plenty of lovely sites to see along Victoria‘s downtown waterfront, The Empress Hotel, the unique Parliament Buildings, a stroll through Beacon Hill Park. However it may surprise you to know of some unusual visual feasts at a few of the local hotels. In December’s gloom The Empress Hotel, the Hotel Grand Pacific and the Inn at Laurel Point may be visited to see festive creations competing for your vote and raising money for local charities.

We visited the annual Gingerbread Showcase, which has gone national, at the Inn at Laurel Point. These sculptures are created by professional and amateur chefs alike. This year’s theme was transportation and the monies raised for charity went to Habitat for Humanity. The exhibit was already somewhat tired as we were visiting on New Year’s Eve and the creations had been on display since Nov. 23rd. However, the detail, the ingenuity and creativity was never in doubt.

Many displays featured boats or ferries complete with windows, holiday decorations, lifeboats and wildlife swimming along side. I think my favourite was the CoHo. Hmmm – but there was also a beautiful First Nations canoe. Another favoured mode of transportation was trains. By far the best train was the Hogwart’s Express from the world of Harry Potter. Many of the main characters could be identified, Harry, Ron and Hermione were in the front, Hagrid was driving… it was definitely a hit with the younger generation. For originality there was a sculpture of Cinderella’s pumpkin coach complete with a staircase and a clock, (which was missing). It looked like the Cinderella sculpture had won first place. There was also an incredible dragon ridden by a princess atop what looked like a portion of the Great Wall of China. A two-sided sculpture caught my eye, from one side was a wooden wardrobe the other side was a winter wonderland. Naturally the depiction was from the famous Narnia series, The Lion the Witch and the Wardrobe. A great deal of time, care and patience was put into these edible works of art.

Although we didn’t stay, the Aura Restaurant across the hall from the gingerbread display may have tempted those with weary legs or with a healthy appetite for some lunch or tea. It was a most enjoyable way to spend an hour with a five and twelve year old on a drizzly December day.