Superheroes on BC Ferries 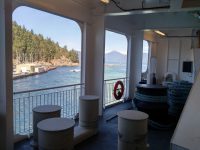 This isn’t going to be a story where an infant saves a senior from some horrible fate in the cafeteria.

Rather, it was a gorgeous summer sailing from Horseshoe Bay to Nanaimo. We were starting or family vacation at last before the madness of the Fall descends.

We were seated near the cafeteria when my son says, in hushed tones, “Dad, is that Jimmy Olsen?” My son had successfully recognized Mehcad Brooks of the TV show Supergirl, which films in Vancouver.

Later on the sailing I saw him again and stopped him and introduced my son and daughter to him. (My son really wanted bragging rights at school in September.) I was glad to see him being a tourist. It was his first time on BC Ferries. I was glad their shooting schedule allowed him to enjoy the scenery. Apparently, they had so far shot 5 of 23 Supergirl episodes so far. It will take them until April to finish!

I’m hoping he got to see the great scenery we enjoy every time. A view from where we parked the car on the ferry. From the sun deck. If you click to see the bigger image, look closely to the right and you can see Mt Baker in the distance. I guess I wasn’t the only one thinking a picture was a good idea.