Bard on the Beach is not a Comedy of Errors 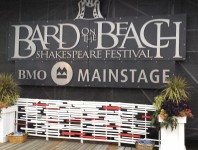 It had been a number of years since I’d manage to organize time for Bard on the Beach, the Shakespeare festival in Vancouver. It is a collection of tents in Vanier Park nestled next to the Museum of Vancouver and the City Archives.

“Bard”, as the company is called, has been running since 1990 where they had one tent and one play they put one and now have the main tent which for 2015 alternated between Comedy of Errors and King Lear. On the small stage they were performing Love’s Labour’s Lost and Shakespeare’s Rebel, a modern play by C.C. Humpreys.

Christopher Gaze has been the Artistic Director all along and what makes the performances special is that they work hard to make the material accessible and the directors seem to have creative reign. For example, we saw Comedy of Errors and the set design and costumes were in a steam punk style. The characters were completely unaware that they were in a techno Victorian era and they used the style to comic effect.

We had a person under 10 at the performance and prior to it the Bard youth students performed some of their skills for the young folks. It took a bit for my youngest to get into the action, but the performances were so animated he figured it out.

I understood that Love’s Labour’s Lost was set in the 1920s. I tried to book those ones but I could not get times that worked before the end of the season.

The Bard Village has a souvenir store, snack stand and is helped out by lots of friendly volunteers. This festival is truly a Vancouver tradition and something the city should be proud of. More info here.