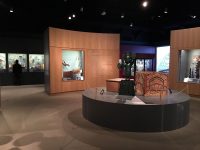 The Museum of Vancouver (MOV) is located in Vancouver‘s Kitsilano neighbourhood at 1100 Chestnut St with its staple crap sculpture and fountain out front. The building connects two museums the MOV and the H. R. McMillan Space Center. They are separate museums and have separate entry fees. During spring break my brother and I visited the Museum of Vancouver and it was a lovely trip. We live in Kitsilano, so getting to the museum was not a challenge. The total entry fee for the both of us was eighteen dollars. The museum has six permanent galleries and one ever changing display gallery. The display gallery at the time we visited was called ‘Haida Now’ and it was a beautiful display of native American art. This particular display was done in partnership with the Haida Gwaii Museum and it was stunning.

The rest of the galleries follow the telling the history of the city of Vancouver. Starting with their display ‘the city before the city’ and ending with the 1960-1970s gallery ‘You Say You Want A Revolution’. The story is neatly told with wonderful interactive and lifelike displays in every room. My top two galleries were the 1950’s and 1960-70’s. The 1950’s due to the jukebox that you can actually put a quarter in and it will play a song of your selection! Listening to ‘Lollypop’ in their recreation of a diner was no waste of twenty-five cents. The 1960-70’s gallery was also an enjoyable one, as they have clothes from the time you can dress up in and see how you look. My nine-year-old brother really enjoyed that one.

All in all, this museum was definitely worth visiting, they do a wonderful job of having fun and learning together in their exhibits and I might return just for the Elvis alone.

One Response to Museum of Vancouver