Stanley Park Seawall is Best on a Grey Day 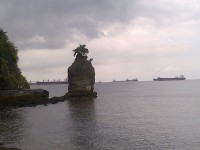 It was an odd set of circumstances that found me cycling around Stanley Park’s seawall. I was keeping good company with about a dozen other cyclists on a June weekday. It was a work team building exercise and also a way to add steps to our pedometers. The GCC (Global Corporate Challenge) was on and we wanted to boost our numbers.

When I was cycling around the seawall, I started thinking about this park. It’s huge. 4.05 sq. km and the seawall itself is about 10 km in circumference, depending on what you consider as the starting point. See this map for more detail.

This hugeness, which includes the Vancouver Aquarium, a cricket pitch at Brockton Oval, a public swimming pool at 2nd Beach, a great restaurant at Ferguson Point and more is pretty impressive. It’s even more impressive when you think that it’s 9 blocks from downtown Vancouver. You could say the same about Central Park in New York at 3.4 sq. km but it’s not surrounded by the ocean and the mountain vistas.

The main point of this park article is the fact that our group virtually had the seawall to ourselves. The worst rain we suffered through was an occasional spitting-upon, but nothing heavy. Normally on a sunny day there’s a throng of bikers, bladers, walkers, runners, strollers, wheelchairs and unicyclists crisscrossing the path all operating at different levels of expertise in their chosen mode of transportation. Despite that, the raw entertainment value during these times is hard to beat.

However, we were not entertained that way. We rode around around so quickly the team decided to do it again. Great numbers that day for the GCC. And more time to take in the amazing scenery.

As a result of the peacefulness, we managed to see a heron, a baby eagle standing by the shore and what I’m fairly certain was a Red-breasted sapsucker. (Sadly the grey weather makes bird identification more difficult.)

Thus, if you are in Vancouver on a grey day — which is not an unusual occurrence — don’t forget the Stanley Park Seawall. It may give you the peace you are craving, even if you didn’t know that’s what you needed.