The Merry Wives of Windsor … Ontario? 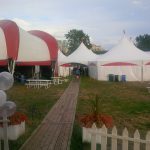 An annual treat for visitors and Vancouverites alike is Bard on the Beach, which for 27 seasons has brought Shakespeare’s works to life. This year included The Merry Wives of Windsor, Romeo and Juliet, Pericles and Othello.

“Bard,” as it’s known locally, is set up in Vanocuver‘s Vanier Park with some very large tents that, according to the program, takes 10,000 hours of labour to set up. You are well protected from the elements in the tents but you still have that outdoors feeling with sounds from the ocean.

But, what about the show? We enjoyed the Merry Wives of Windsor, but with the setting being Windsor Ontario in 1968. The production weaved some classic 1960s torch songs into the production and the actors all seemed to be talented at one or more musical instruments and, less surprisingly, could sing.

Upon looking at the program, Ben Elliott was the music director and played Slender one of the many over-the-top characters in the play. Slender was presented as an idiot channelling Jim Carrey via facial expressions and demented walk.

This was an example of totally appropriate totally silly renderings of all the characters. In a way it made Falstaff seem almost like the sanest character in the play.

The cast capitalized on the written absurdity of the characters and chewed up the 1968 styles and themes. This helps when faced with the Elizabethan English, which always takes me a few minutes to acclimatize to. Since it was family night, a number of children were in attendance. They didn’t need to understand phrases like “Thou art the Mars of malcontents” to laugh uproariously as the hapless and jealous Master Ford ends up head first in the laundry basket with his legs up in the air.