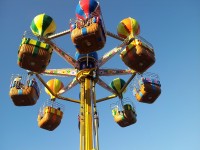 Perhaps the mish-mash itself is the allure. The deterrent and tarnish on the allure is the wallet busting pricing. E.g. a 591 mL bottle of Dasani water is shown everywhere (in perky lettering) as $3.50.

My family and friends chose the Saturday of the Labour Day weekend to attend. Hot sunny day. Pure glorious summer. The shadows were lengthening though. The PNE is an annual event running from mid August to Labour Day and for many is a summer ritual.

From a pricing perspective, I suggest if you have ride-mad kids to pre-purchase online the gate fee (under 14s are free). The Seven-Eleven sells these tickets ($16 gate fee is $14 in advance). It’s easy to buy online if you have a printer. The adult Fair Ride pass is $39.75 if prepaid. You have your hand stamped and can go on almost all the rides with it. The mathematics of “savings” is complex. Once on site, you can buy 30 coupons for $42.75. Each ride requires 4 – 8 coupons per ride/per rider. A small mini golf course was 6 coupons per person. Basically if you plan to go on more than 5 rides, you are better off with the pass. It also reduces the mental churn of watching how many tickets you have left. At that point what ride you go on is a function of the length of the line up and how interesting you find it.

Incidentally I was an idiot and bought advance gate passes when not required. The young chipper people at Guest Services refunded me with no issues or red tape. (Maybe they knew of my Whack-a-Mole weakness and assumed the money would soon be theirs regardless.)

My recommendation is to aim for the gates at opening time of 11 AM. Then hit the super popular rides (e.g. The old wooden roller coaster, the log plume ride, Ferris wheel, etc.) before long line-ups occur and before you have too much food in your stomach.

There are tons of shows. Sadly my primary job was chaperoning pre-teen girls so the focus was on rides, food and games.

The activities that I managed to see some of included:

Meanwhile, on the midway, I lost money to dart games, Whack-a-Mole and other events. In my opinion, especially for younger visitors, the darts against balloons games are the best for kids because when there’s a pop there’s a good sense of accomplishment, unlike many of the other games. Interesting things happen on the midway. While I was chaperoning the pre-teens, my wife and another adult friend were guarding four early elementary age kids. They were very cute and were given gifts for posing with aspiring actors working in LA who I presumed were Vancouverites. Look at the picture and tell me if you recognize them. I don’t.

Food. It’s important to realize that for some reason the PNE attracts the deep-frying of food products that should not be deep fried. Like Mars bars, pickles and pies. One wrinkle I’d not seen before was chocolate dipped bacon. However, beside the place serving that particular delicacy, were a few really serious BBQ places. Places claiming to have won competitions. (I simply don’t get how you compete at BBQing.) So, due to arriving before the rush, I indulged in a pulled pork sandwich. True carnivorous humans need only apply.

Maybe that was the allure that worked on me. I don’t remember the price because I had stopped looking by that point. And maybe that’s the PNE’s master plan.