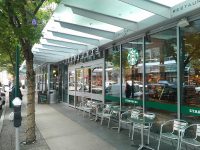 The chain is an offshoot of the more aggressively priced Save-On Foods. But Urban Fare is not the place you go for grocery deals. What it does have is higher quality products than you might see elsewhere. It’s definitely the emergency “Honey get me something on the way home from work I’m making pasta sauce” destination.

However, at lunch time Urban Fare on Alberni is an alternative to the conflicting smells and sounds of nearby underground food courts. There is a self serve hot entrée and salad bar. This way you can pick and choose, which is nice if you’re in calorie control mode. By contrast you could have a steak sandwich at the Tim Hortons across the street, but it is 75% bun with a vanishingly small amount of meat.

On Fridays the buffet normally has two types of fish. There’s also an entrée bar where you can get a lamb shank, steamed vegetables and mashed potatoes. They’ll even sell you a beer or wine if you’re keen to be under productive at work that afternoon. Sushi, thin crust pizza and more offerings are present. I suggest coming a little in advance of 12 noon because the lunch time crowd tends to be big and this will save you time and you can grab a seat. Snacks as far as the eye can see!