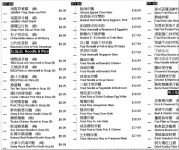 Dim Sum is not something I have a chance to enjoy very often, but I recently had a chance to organize a lunch for 12 at Victoria Chinese Restaurant. It’s located in the Royal Centre on the Melville Street side near West Georgia and Burrard in downtown Vancouver.

It’s been in that location for a number of years but there was a fire a while back and it was out of commission for over a year. But it’s back and in my opinion a great place for Dim Sum.

However, if you were expecting delivery via trolleys, they don’t do it that way. I suspect it’s because they’d rather have the floor space for patrons. The space by the way, is quite large.

It’s also most fun to have a lot of people join in on Dim Sum; we had 12 and the results were that the selection we could all share was terrific.

Take a look below for a sample.