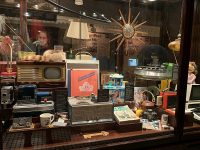 By the time you read this, you will most likely be out of luck for seeing the 3rd Floor of the BC Museum the way it’s depicted below.  I thought I’d heard of this news during 2021, but a relative of mine pointed out that we had scant days to see the First Peoples displays and the very popular Old Town replica with presentations on the logging and fishery industries as well as Captain George Vancouver’s ship Discovery.

The article below gives the broad strokes of the plan.

However, the plan is not without controversy.  The relation who pointed out that the changes were coming has family heirlooms in the museum, specifically her grandfather’s fly fishing equipment from the early days of his surveying work in the Province.  (I still marvel that I know someone whose belongings from a Victoria basement ended up in the BC Museum.)

Regardless, we get to watch the process of including many voices in the refurbishment.  Detractors of the change to the museum feel that this will erase their history.  Indigenous people hope that their lived experience will be better represented.  All the other groups who’ve moved to Canada since original colonization hope the same thing.

The 2nd floor remains open and has the cool, iconic, mammoth recreation.