Shopping in Oak Bay, near Victoria 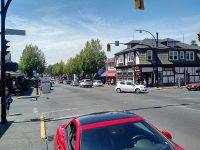 You might be forgiven if you thought Oak Bay were in Victoria BC. On a bad day it’s 10 minutes from downtown Victoria, but despite its modest size, it has its own police department. Given that Oak Bay is 10.5 sq km and Victoria is 19.5 to sq km, it seems odd.

I suspect that this jurisdictional isolation has allowed Oak Bay to retain its character and not be subsumed into the larger municipalities. Oak Bay is also home to The Uplands, a very swishy neighbourhood to the north-east.

If you walk high street (i.e Oak Bay Ave) there are shops both familiar and different. For example I bypassed Starbucks to try the coffee at Hide + Seek. It’s a totally different vibe. Very airy. New agey. They were playing vinyl in when I was there, this included a Paul Simon LP.

You’ll likely perceive from the storefronts that I photographed, I was travelling with a younger crowd. The shopping included sweets and toys, but also shoe shops, clothing, art, a book store, a pub and more.

The shops were also supporting public of sculptures. The two giant acorns were an acknowledgement of the Garry oaks in the area. It was a bit absurd, while the others we found were more along the serious avant guard.

Check out the images but probably more importantly, swing by this neighbourhood and see for yourself.