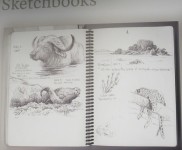 New as of 2013, at 470 Belleville Street, Victoria, I was pleased to find (at the former location of the Wax Museum) a gallery of Bateman’s works. The entire building was reno’d within an inch of its life. The facilities (super clean bathrooms) were completely updated.

The gallery itself is on the 2nd floor. It’s worth watching the introductory 5-minute video. On film, Bateman himself talks about his environmental views. Subsequently when you step into the gallery you see some of his message in the paintings. For example, there’s a painting of a beaver who is clearly on roadway. The small amount of generic yellow road line makes the image utterly sad. Another picture shows an angry eagle with its back to an old stump that was clearly logged by man many years past. It’s as if the eagle is saying “what the hell were you thinking!?”

It’s also a chance for you to determine for yourself if the notion of photorealism is a good or bad thing in the artwork. Bateman addresses it in the short video, but it’s up to you to decide what the artist is trying to achieve.

Now for those of you who were along for the food on this trip, you might want try Steamship Grill & Taphouse, which is on the main floor. The halibut and chips were good as were their pizzas, which were tasty thin-crusted versions. The service was a bit slow, but I’m not sure if that’s due to it being off season.

For more information on the gallery and the restaurant go to: